Charlie's new chooks: how he started from scratch

My friend Charlie and his wife Anne are turning their smallish backyard into a little urban homestead. To complete the picture of vegetable garden, fruit trees and compost, they just HAD to have some chickens. Good plan, I say.


Charlie's been working on the set up for a few weeks now, building his own coop and fencing, and re-using an old screen door as a gate. Here's what he did.

Firstly he looked at his garden to think which corner the chickens might occupy. He had an area between the back of his garage and his rear boundary fence that was unused. It has some overhanging trees for shade (although he has trimmed them back quite a lot - they will regrow though), but gets a reasonable amount of sun.

Bonus: in one corner the terrible weed Tradescantia is growing. Chickens love this weed! They can even eradicate it.

Another bonus: Charlie won't have to mow this area any more. It may even become denuded. His hens will be thrilled if he digs some of it over every now and then so they have loose material to dustbathe, peck and scratch in, or maybe he will throw in leaves, etc. to provide that vital loose material. 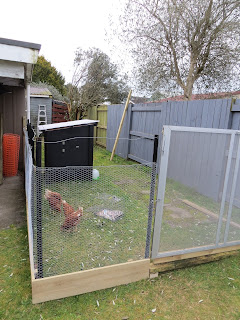 The coop is always a big sticking point when it comes to getting chooks. It's hard to find coops that are well designed, sturdy and come at a reasonable price. I gave Charlie a quick run down on what I think is important in a coop - briefly, a perch that is suitably thick with rounded edges, and a nest box lower than the perch.

Charlie built this coop in his garage. He bought the plans online from The Garden Coop for US$24.95 (his is the 'basic coop' model) and spent about $300 on the materials. He said the plans were incredibly easy to follow and you don't have to be an experienced woodworker to make it. He worked on it during weekends for a few weeks. Best of all, he really enjoyed doing it and feels pretty damn pleased with himself!

I think it looks pretty good too. A few thoughts on it:


What you can't see in the photo are two little doors from the outside. One goes into the nest box for easy egg collection, and the other is a little hen-sized door. For the photo I opened the human-sized cleaning/access door.

Charlie bought a Chooketeria feeder to keep out the sparrows, but unfortunately it is too big to fit inside the coop, so he's going to situate it outside, possibly under a small shelter he's planning to build.

Charlie is planning to eat plenty of the vegetables he grows himself. That means KEEP OUT CHICKENS. Those strong legs and beaks would decimate his garden. At 1.1 metres high, plus another 20 cm of height created by the wire running across the top, Charlie's fence should successfully protect his garden. If the chickens do jump to the top of the wire mesh, he'll run something between the mesh and the top wire to fill in the gap. 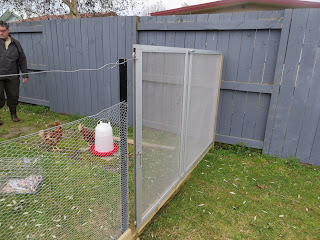 Check out the old screen door on its side, which he's repurposed as a gate. Nice recycling. 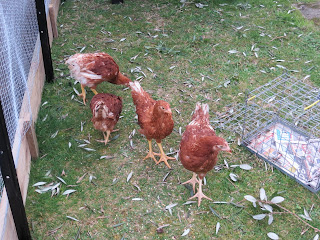 Charlie chose to go with brown shavers, which lay extremely well - he can expect frequent eggs when they start laying at about 20 weeks of age. He got them for $25 each from this trader on Trade Me. They were 15 weeks of age, and he had to drive about an hour to get them. Ideally he would have got them a few weeks older so he didn't have to wait so long to get eggs, but it's a small point.

Brown shavers are quite sprightly at getting over fences, and Charlie will probably want some fresh ones in two or three years, as they are generally worn out by then. Heavier breeds are much easier to contain and lay for longer, but may go annoyingly broody and certainly don't lay as well. Heavy heritage breeds cost more, too.

NOTE ON TRANSPORT: When Charlie returned from his chicken-collecting mission, he had the four birds squashed into a small cat cage (you can see it to the right of the photo above). I forgot to advise him to take cardboard boxes with plenty of head room, and some tape to hold them closed. Make sure there are air holes, too, and that the birds aren't left in a hot car.

Charlie has to lift them onto their perch because they are sleeping in the nest box, but he's planning to block that off to force them onto the perch. They are too young to need it for its true purpose yet, anyway. 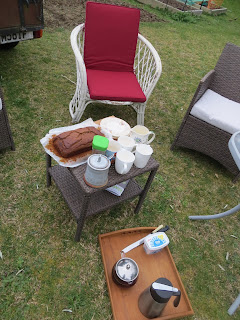 With the birds happy in their new home, all that was left for us to do was sit down near them and have a civilized cup of tea and slice of warm, home-made gingerbread. Lovely.

"Certainly we are finding the chickens to be little characters, the way they are cantering around their run exploring. They are making serious inroads into getting rid of the Wandering Willy which gives me much pleasure.  Our 9 year old neighbour Olivia sits up on the fence and enjoys watching them, and her big brother Jack just came over to tell me he had managed to throw the basket ball into the chicken farm by mistake! Anne is enjoying ensuring they are safely in bed at night letting them out in the morning. All in all they are a entertaining and positive addition to the household - albeit not necessarily a cheap, pun intended, investment. Now they better get laying!"

Ah, you just need a bit of patience ... once those eggs start coming you'll feel that years of eggs will make up for the initial expenditure.

Posted by Keeping Chickens NZ - Andrea Graves at 10:52 am