How to introduce new chickens to your home

No matter how carefully you choose your first batch of chickens - the right number, the breed that suits you - one day you'll find yourself wanting new ones, probably because you long for that first youthful year when you had so many eggs that you were giving them away. 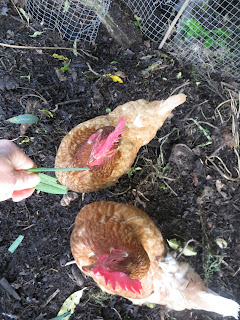 This is the position I found myself in recently, with these two old hens that rarely laid, and having to buy eggs. Horrors! What did I do?

There are two ways to go about the upgrade. Firstly, you could get rid of all your chickens, and start afresh. There are people who say this is the best way to go because it reduces disease transmission between old and new birds. This assumes you have a disease problem, though! I don't, and never have, I think because of the way I keep my birds. (I did have a little clean up before the new ones arrived, though.)

Sometimes there are advantages to keeping one or more of the old flock. I took this second approach: keep the goodies, ditch the duds and bring in some new blood.

In the past I've held on to good layers or a beauty who has stolen a place in my heart. But this time it was pure practicality: new birds learn from the existing birds how to use a Grandpa's feeder (a hopper-style feeder where they stand on a platform to open the lid to the food). They pick it up very fast when they see it done. Otherwise, training them is a plain nuisance.

This time I kept one older bird purely to show the others how to use the feeder. After two or three weeks she too went to my Fiji-Indian friend, a renowned cook who upcycles her into a curry. The downside was that she was distressed that her friend disappeared before she did, and, as predicted, she became a bully.

The urge to attack new birds is deeply ingrained in chickens' nature. It can be a shock to see this if your existing birds have always been peaceful!

The attacks are more of a problem in urban situations like mine where chickens are likely to be enclosed rather than free-ranging, because the victims can't escape as easily. But even then they are unlikely to result in serious injury.

A big advantage to the old-out/new-in approach is that it avoids older birds brutalising new birds. A group of completely new birds is likely to dwell in peace from the start.

I'd always try to get new ones all the same age though: if some are sexually mature and some aren't, there may still be a bit of bullying from older to younger. Very young birds are definitely vulnerable to more serious attack from mature ones if they can't escape. (

This time I bought an Orpington cross who had already been laying a month, and three brown shaver pullets about 18 weeks old but decidedly immature. The Orpington has been an imperious queen from the start, the young madam - she even declared herself equal to the old brown shaver from day one. The now-lonely old one immediately accepted the newcomer as a substitute buddy, which surprised me greatly.


It helps to make sure that food is ample and spread out widely during the troubled time. I flung scraps left, right and centre. That way even the victims get enough to eat, and nobody's irritable with hunger. For a few days my new brown shavers stood huddled together and unmoving to avoid the bullies, so I put some containers of food and water near their safe spot under the shrubs. It was hard to believe it would ever happen, the poor terrified things, but they soon grew brave.


The unsettling scene seems to be better when the newcomers are in the majority, so I try to keep just one or two older birds and get three or more new ones.

No matter how brutal the bullying seems, or how petrified the new birds are, it usually settles down in a couple of weeks. By then the under-hens have learnt to submit to the stronger ones, and the strong ones feel assured of their power. Sometimes it settles down so completely that they all seem to be good friends. Other times there might be some persistent but mild acts of dominance - as per Queen Orpington, in my case - but mostly they'll be confident and content.

I'm a big fan of chickens sleeping on their perch, so their nest boxes stay clean and they don't suffer the health effects of sleeping in their own excrement.

Sometimes new chickens need to be encouraged onto their perch. From the first day of arrival you can go out after dark with a perch and do a head count. If anyone's missing from the perch, find them and lift them onto the perch, making sure they're stable before removing your hands.

Mine were keen to perch from day one - in fact every chicken I've ever had has been - but the young brown shavers were too scared to go inside next to the older birds. Instead they perched on some precarious sticks outside. When I put them on the proper perch, the old brown shaver knocked them off! So I put the generous figure of Queen Orpington, who was never quite so rough, between them and her. By the fourth night at dusk they were all getting up on the perch by themselves. Phew.

If your set-up is such that your birds could escape to Neverland, then it's wise to shut a new batch of birds in their coop during day and night for a few days (not with bullies, of course). When they are used to where they sleep and feed - and lay eggs, if they're old enough to lay - then they can be allowed to roam, and they probably won't go far.

Once a friend of mine got chickens for the first time, failed to shut them in, and from then on only saw them in the distance as they roamed wild forever more over the surrounding lifestyle blocks!

Some people feel it's wrong to get rid of old birds just because they don't lay well. I feel that as long as it's done gently and as humanely as possible, it's really worth the inevitable disruption. 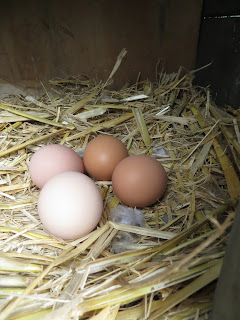 This is what greets me most days again now - wonderful.