The case of the bald head: why pecking isn't always aggressive

It's easy to assume that when one hen pecks another, it's an aggressive act. "Ah, the pecking order," you might think, and feel sorry for the victim.

And sometimes it is like that, but often not. And the good news is that by setting up your chicken-keeping arrangement well, you can prevent at least one type of pecking happening.

Recently I witnessed something I've never seen in my birds. One hen stood over the other, delicately plucking out the feathers from either side of and behind her comb. The 'victim', who looked slightly uncomfortable, stood and allowed it to happen. You can see it in this video. 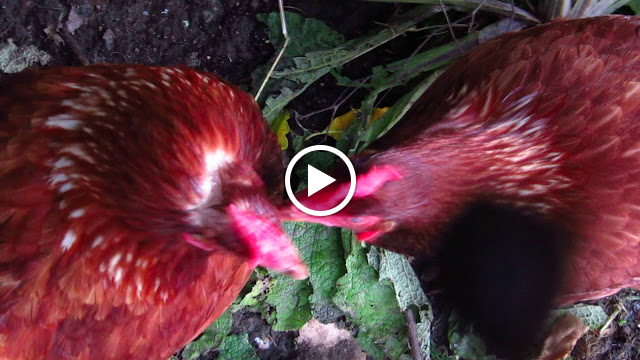 There was no aggression. The pecking was so gentle that the victim's skin was clear and unmarked. She was unattractively bald, but there wasn't a patch of blood or even pink skin.

What's more, these two birds are pals. They hang out together, and dominate their flockmate quite aggressively.

The pecker reminded me of an overly thorough cleaner who just couldn't bear to leave behind a speck of dust.

When this happens, the instinctive blood lust of chickens takes over. They are omnivores, after all! They tend to hone in on the victim and ramp up their pecking (mmmm - flesh!), and it gets very ugly. It turns into cannibalism.

If this happens, the victim will have to be removed until she heals, or even put out of her misery.

Giving hens access to litter to peck and scratch at is vital for preventing this type of bad behaviour. In fact, it's not bad behaviour that's the problem, but a bad environment.

Chickens naturally spend the majority of their day pecking and scratching at loose litter under their feet. This is not optional depending on whether they are hungry or not, although it is a food-seeking behaviour. It's just what they must do, in the same way that a cat must sleep a lot, lick its fur and seek warm places to sleep in winter and cool places in summer. It is their nature. 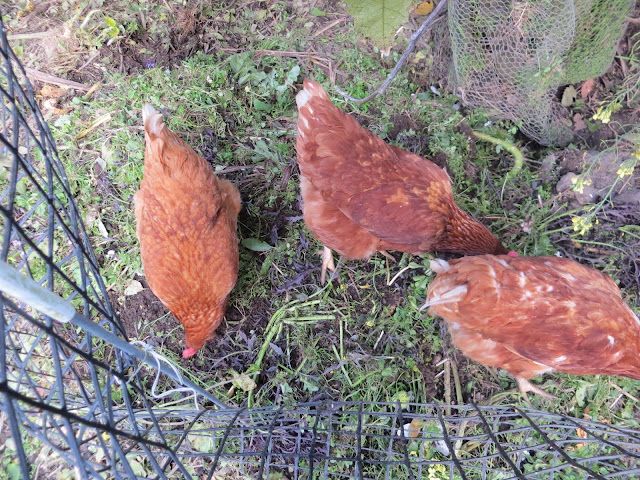 But I had done my birds a disservice. I'd gone away for five weeks during a wet winter, and my husband had no inclination or time to care for their run the way I would have. Let's just say that keeping food in their hopper was challenge enough. The ground was bare and muddy. The autumn leaves I usually collect and spread in their run in winter had gone into the neighbours' green bins (horror).

A bare ground is abhorrent to chickens, especially if it's wet, and they turn to a readily available source of something that seems a bit litter-like: their flockmates' feathers.

You can hear more about this here, in a short educational video from the University of Edinburgh. You can't see the whole thing unless you enrol in the course, but what you can watch is useful.

It's hard to fix - but I was lucky

I only noticed the obsessive little behaviour happening in my backyard because the victim became sick (this was the foxglove poisoning episode - in fact you can even see the gnawed foxglove plant in the background of the video above!). That fact alone shows that I wasn't caring for my birds very well, otherwise I would already have noticed the bald head.

I separated the sick bird, but I expected that when she was returned she would again be plucked. I did indeed see one more plucking episode. But then, strangely, her feathers began to grow back! Now she has a new crop of feathers, and no further problems. 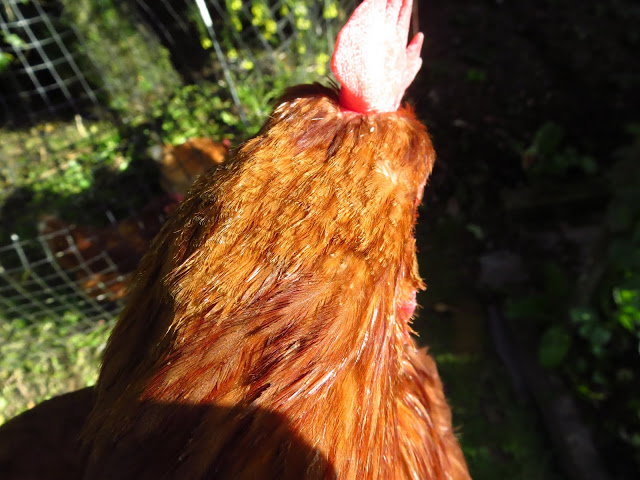 Once this type of obsessive pecking begins, it can become an entrenched habit. It can even be copied by other birds. So always give them something to peck at that is not each other!

If you see feather pecking happening, top up their run with weeds, leaves, compost, fresh soil - whatever you can get your hands on.

Separate the victim if necessary (and definitely if there is any blood).

You can cover the area being attacked with a repugnant solution known as coal tar. This is an old-fashioned remedy for humans, and used on irritated skin in conditions such as psoriasis. It smells really, really strong, and I can hardly imagine how it must taste.

If you have some in your medicine cabinet or can find a strong version at a pharmacy, you could spread it on the victim's skin. In spite of its smell, it is a healing thing, so it won't hurt the bird, and it should repulse the pecker.

You can buy a poultry-specific version here.

Aggression is also a problem

Aggressive attacks happen. They are how hens establish and maintain the social order, and in those cases you'll see that the peck is fast, hard and aggressive, and the victim cowers and moves away, often with a cry of what sounds like fear. This happens a lot when you first mix new birds together.

Often if you keep the birds together from a young age, with no newcomers, there is no obvious hierarchy or aggression. Sometimes there is, though. Once everyone knows their place, the attacks become rare.

When new birds are mixed in with a flock, the attacks can be brutal and frequent, and draw blood. Even your most beloved, placid hen can turn into a monster in this situation! I find that the best solution is to provide:


No matter what you do, it's a very unpleasant situation, and I try to avoid it. An all-in, all-out situation is ideal when you change flocks. That way no newcomers have to run the gauntlet of existing birds that bully them aggressively.

Does the victim mind?

To figure out what kind of pecking problem you have, ask yourself firstly whether the victim seems to mind. If she stands there and takes it, it's feather pecking, not aggression, and you probably have a litter problem. Sort that out first. In fact, sort that out right now so that the problem never occurs.

I firmly believe that the most important knowledge for chicken keepers is not what this sickness or that sickness is, but how to avoid problems in the first place. Give your birds litter, as much space as you can, a private nesting spot and a perch to sleep on. Those fundamentals will go a long way to stop you having to look up what's wrong with them, because they will be healthy and lovely!
Posted by Keeping Chickens NZ - Andrea Graves at 8:24 am