I just had to buy the latest issue of New Zealand Lifestyle Block magazine for its article on 'sour crop'. It's a fairly common way for chickens to die, and it killed one of mine a couple of years ago. Here's a photo of how my best layer looked when she first got sick. 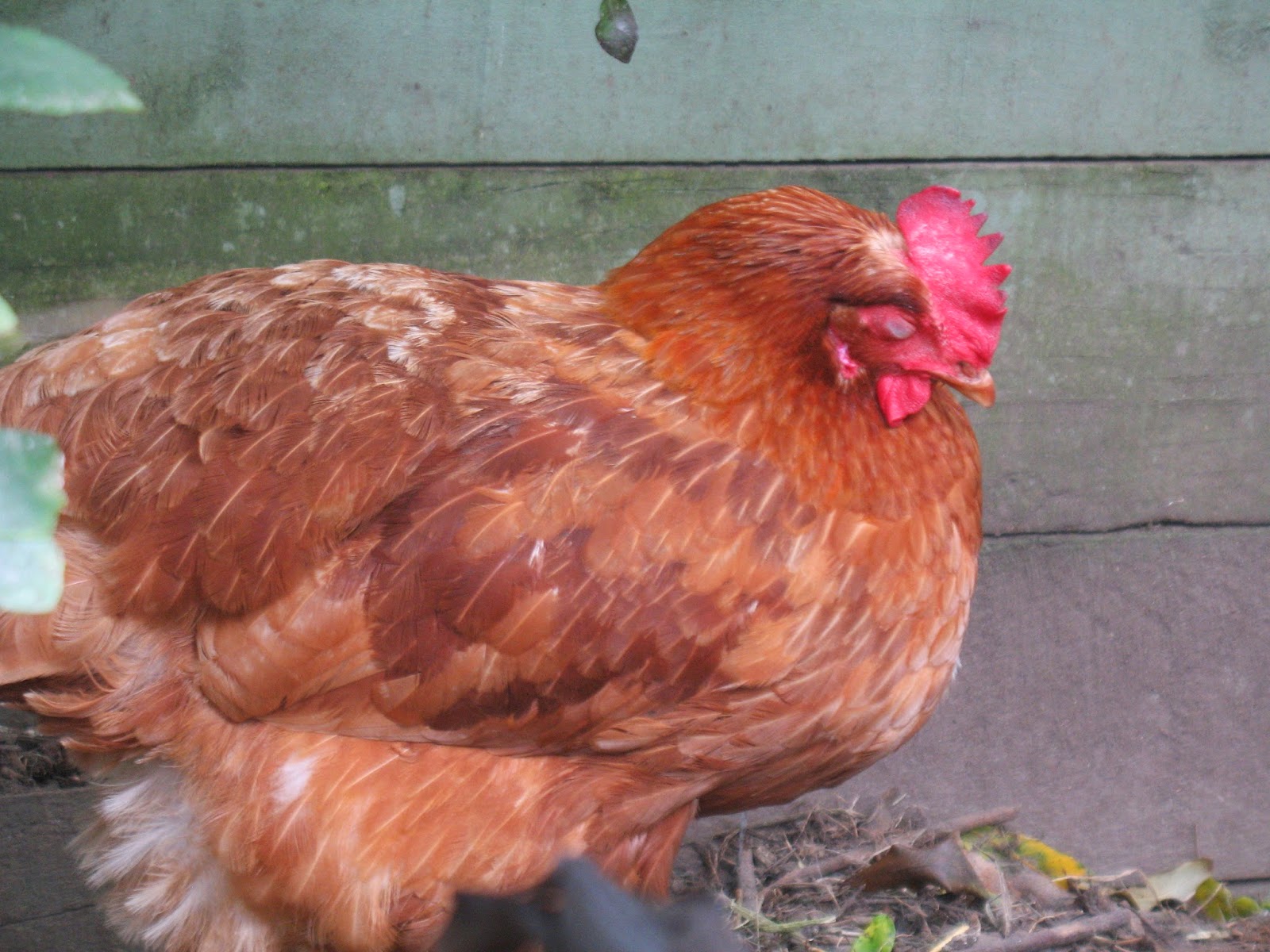 These are clear indications of a sick chicken: a floppy comb, hunched body and closed eyes. Poor thing. She stayed very still, and didn't eat or drink.

She also had a bigger than usual grapefruit-sized lump in her chest. This is her crop: a kind of holding chamber that food goes to first when it's swallowed. You'll often notice your chickens looking engorged in the chest region in the afternoon. That's a normal thing for a bird that's been feeding all day. The engorged crop is often off-centre, and goes down overnight as the food is digested.

In this case, the crop was bigger than usual and the bird was obviously ill. What to do about it? When I rang my 'chicken adviser', a friend in his 70s who's kept chickens since he was about 8, he said "I've never saved one". "But she's my best layer!" I told him desperately. "Oh, they always are," he chuckled, with the wisdom of one who has seen much life and death.

There's a blockage somewhere in the digestive system, he said, and sometimes it's further down than the crop. Because chickens have no teeth, and the food has a while to travel before it gets ground up in the gizzard, they're prone to this problem.

Treatment
Here's the official word on treatment (bearing in mind my friend's dire prediction) from the magazine. Firstly, feel the crop. If it's hard, see (1) below. If you can feel fluid instead, it's sour crop.

1. A hard blockage. Dribble a few drops of olive oil and warm water down the throat. Gently massage the crop downwards from the outside to try to break up the ball and send the contents south. Do this several times, placing the bird in a quiet resting place in between sessions. If she perks up and starts to eat or drink, isolate her and give her soft food for a couple of days, until the crop returns to normal.

2. Sour crop. Tip the bird upside down and massage the crop contents towards the beak. Often fluid will pour out. Stop every 5-10 seconds to let the bird breathe. Then, to counteract the fermentation inside the crop, dribble an antifungal treatment down the throat: a small amount of baking soda dissolved in water, or plain unsweetened yoghurt. 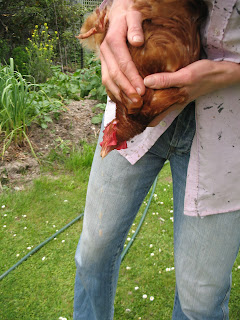 Fortunately, sometimes they live! I've had two birds showing signs of the same thing, one of which I tipped upside down and one that I just left. Both were totally normal again the next day. However, neither of them ever looked as sick to start with as the first one.

Prevention
Why, when one of my hens swallowed a 20 cm long blade of oat grass yesterday, did I dive in and pull it out of her beak before the entire thing disappeared? Because tangles are a main cause of a blocked crop. I now always tear or cut up long grass before throwing it to my birds (I missed that oat leaf).

In nature, of course, chickens don't get chucked long pieces of grass while they live in a barren pen. They tear off bite-sized lengths of grass, which is possible because the plant is anchored by its roots. But when greens-starved birds are chucked long grass, they can't nip off bite-sized bits. They have no teeth to do so, and not enough brain to realise that if they stood on one end of the leaf they could tear off just the tip of it, bit by bit. So they swallow it whole, swallow by swallow, until it's all down there. Then, very occasionally, it balls up and tangles inside.

My friend reckons that the plastic fibres of cut-open feed bags that sometimes get mixed with pellets are also a likely culprit. I pick them out.

Finally, many have pointed the finger at grass clippings. I avoid giving them to my chickens, although apparently they love them. If you must do it, give small amounts only. Because although mostly it's fine and chickens are generally tough and healthy, you don't want to be decorating a casket for your Mrs Cluck. 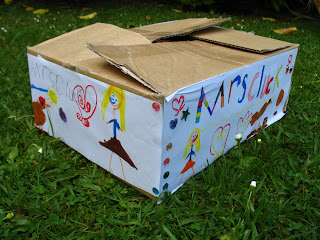