One of the first questions to come up when people decide to get chickens is "What kind of coop shall I get?"

Here's ours, with plenty of photos. Sorry, I didn't clean it for you - I don't do much of that! This is a low-input coop. My husband built it using mainly leftover fencing timber. It houses four birds comfortably, five at a pinch. They spend most of their time outside in their pen, coming into the coop just to sleep, lay, eat and drink. 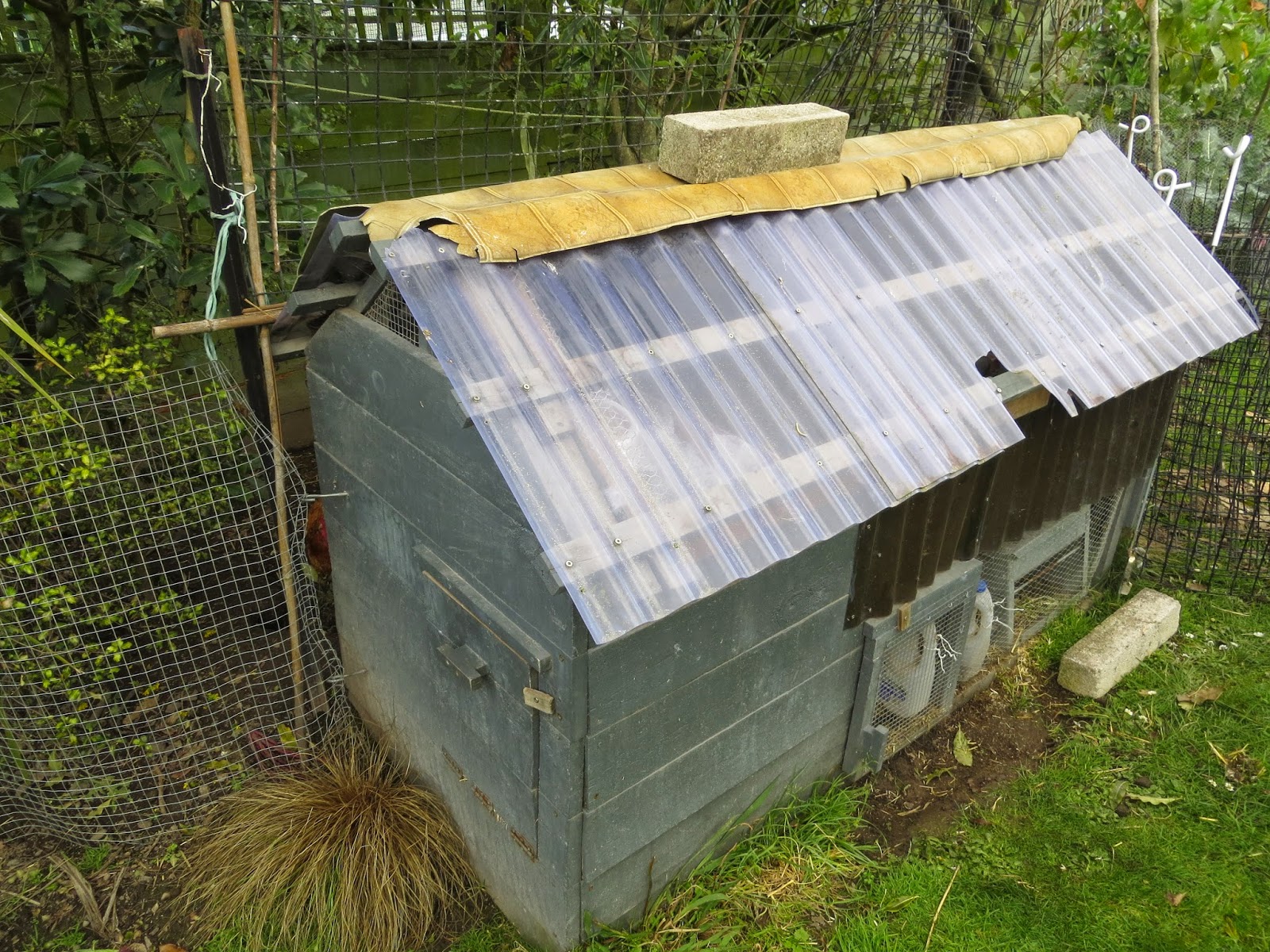 There's a gap at the top where the hinged roof opens up for access. The gap is covered with a bit of old floor vinyl to make the coop watertight. The brick stops the flap blowing open. This is the goofiest part of the coop. Note the ventilation gaps at the end (you can only see one). These are very much needed in summer.

Nest box
Then to the business end, the nest box. The floor of this about 50 x 50 cm. Sometimes two hens squeeze in there at once. I line it with paper (an old potato bag at the moment) and barley straw. If an egg gets broken the whole messy lot of it can be chucked in the compost, and a new spud bag and straw laid down. Access is easy, as you can see.

Hens really need a private nest box - they have a strong desire to tuck themselves away when they need to lay. It needs mouldable nesting material in it. (Makes me feel so sorry for those battery hens.)

Aim for one nest box per 4 hens. That said, apparently if you have more hens they often all seem to want the same particular nest box, even if the other ones seem identical! 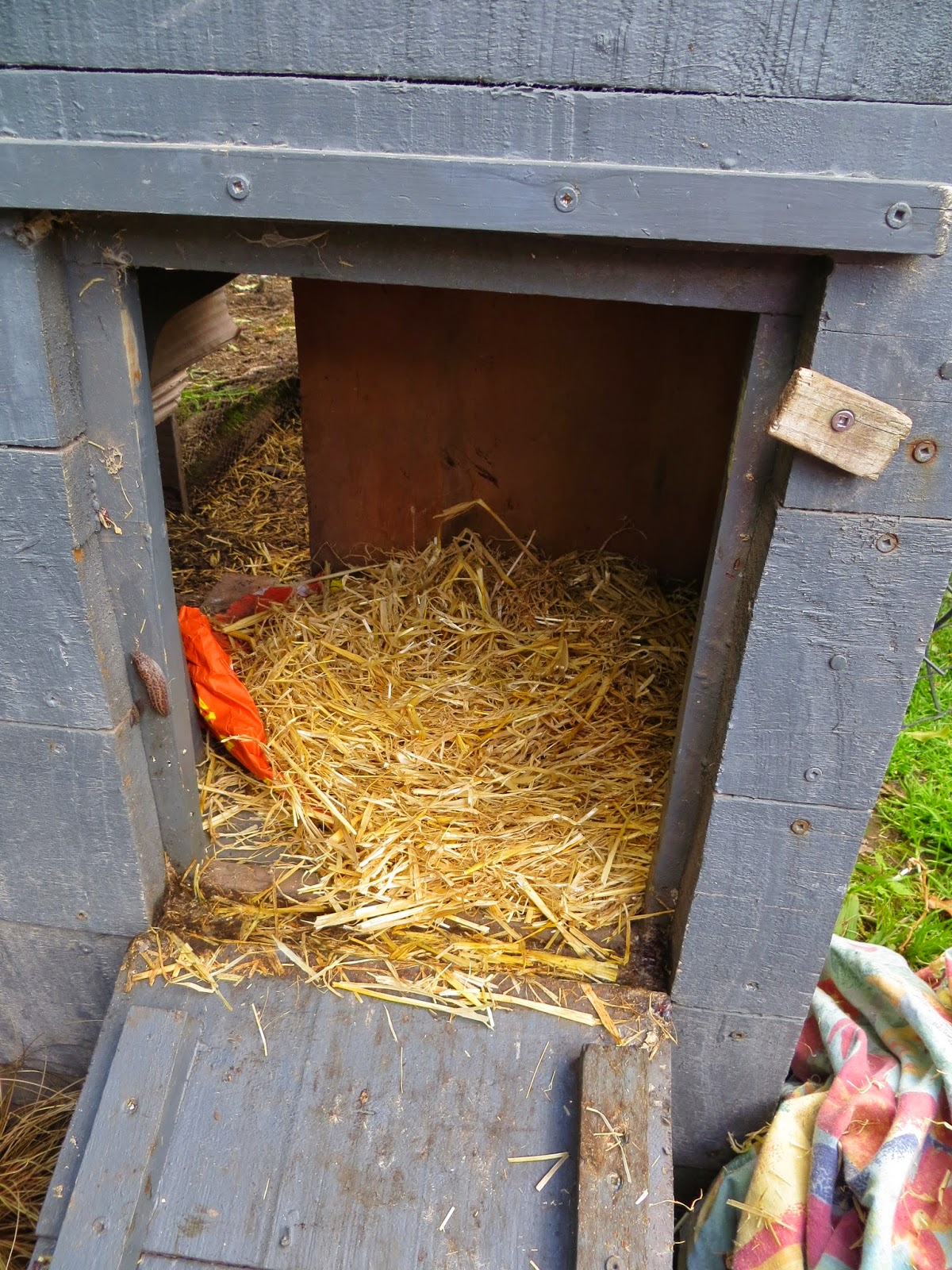 Indoor essentials
Inside are the other main essentials: a perch, food and water. You can see we also have a little space for extra equipment - grit storage, gloves etc. This sits above the nest box. 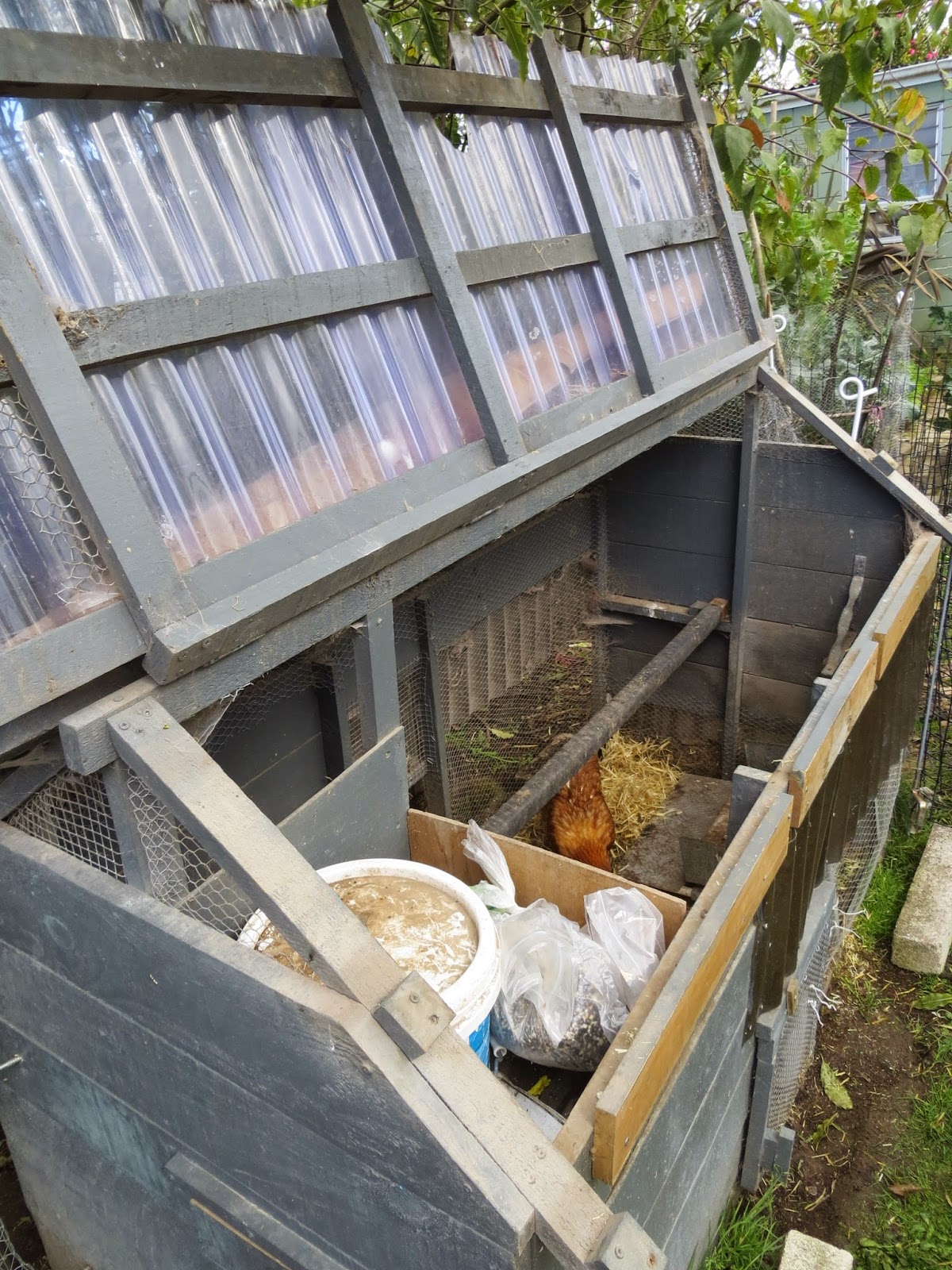 The perch is about 5 cm diameter and wooden, wrapped with rubber from an old bike tyre inner tube. Scientists have even thought to ask some chickens what they prefer to roost on, and a design similar to this won the competition. Five centimetres is thicker than you'd think is necessary, but they do have big feet. Note that it's square timber rounded off at the corners with a rasp. 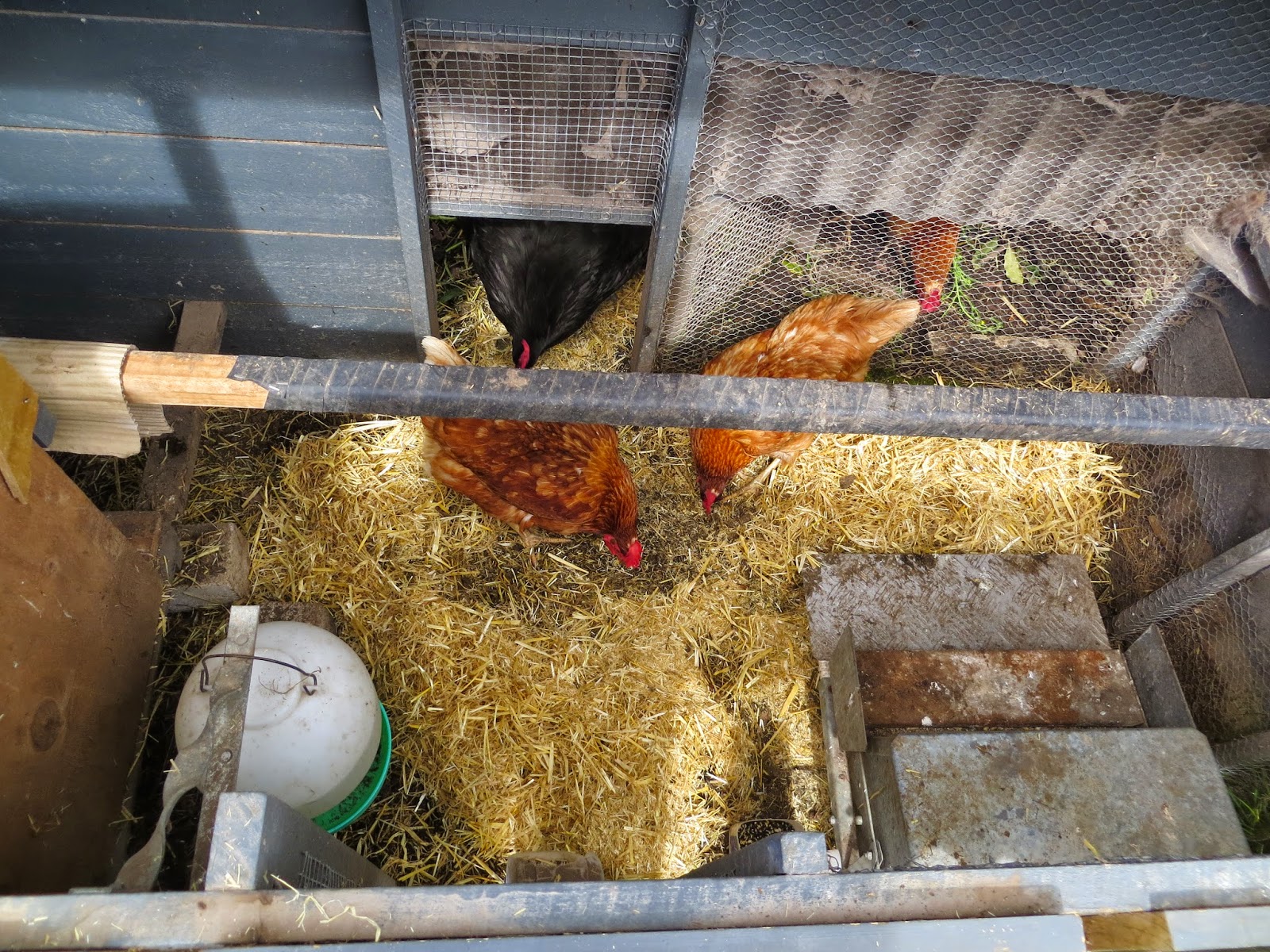 We used to have a metal pipe as a perch, but it was freezing in winter. It did get around the problem of red mites hiding in cracks in the wood and feeding on blood from chookie feet at night time. We've never had red mites. I hang some corrugated cardboard over the perch because apparently if they are around they will cluster under it during the day, so you know you've got a problem to deal with.

Note that the perch needs to be higher than the nest box. They like to sleep at the highest point, and if the nest box is higher they'll sleep in there and poo in it all night. The nest box should stay naturally free of poo (you know that old saying about not pooing in your own nest... it's true!).

Food extras
Chickens also need crushed shell and tiny stones to eat. Free-range birds find their own stones. These help them grind up food in their gizzards. Penned birds might not, so it's safest to provide some. These are my not-so-fancy shell and stone dispensers, made from old milk bottles. They're tied to the coop walls, which are mesh at the bottom to allow plenty of ventilation. 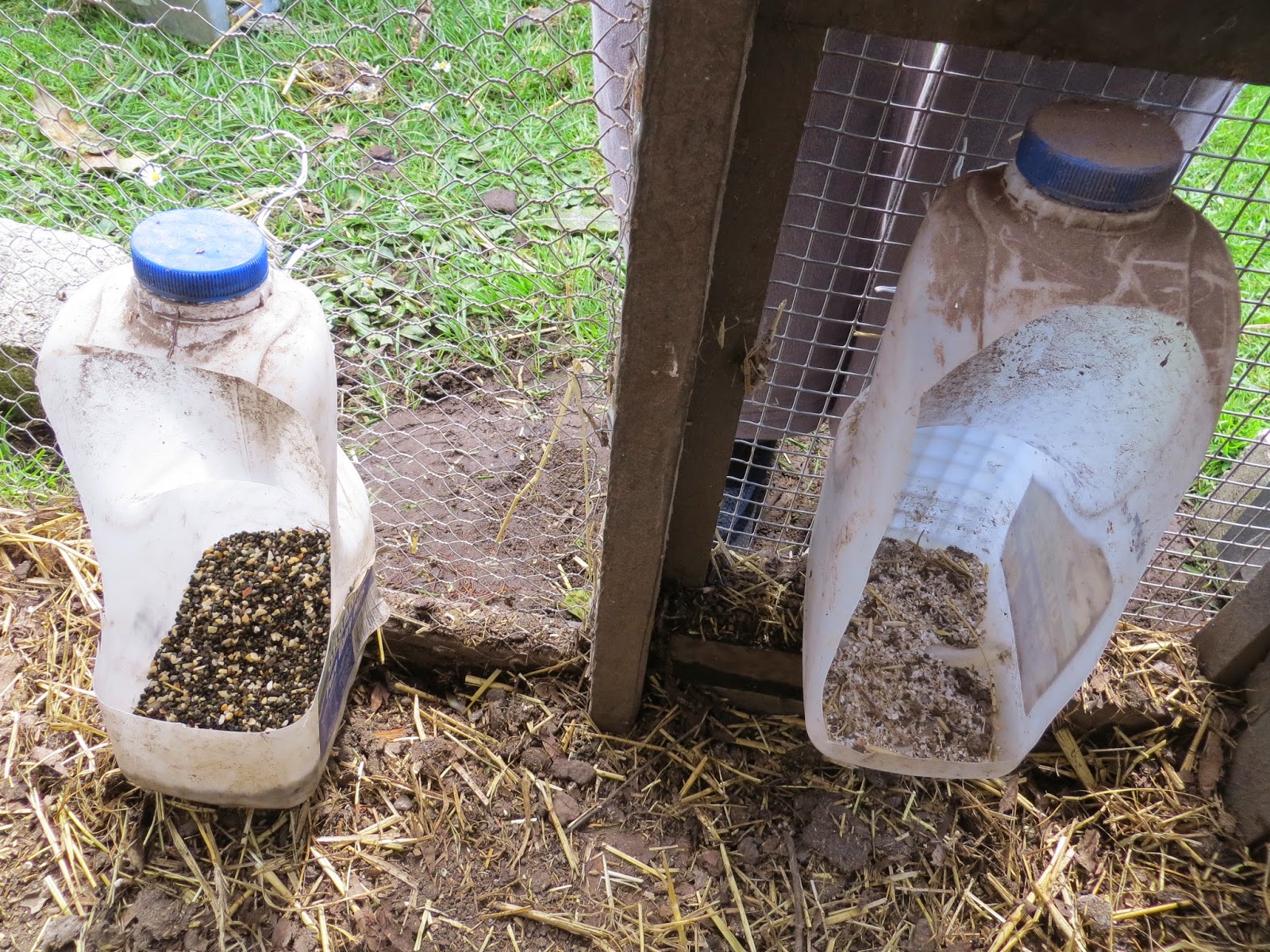 Floor
The coop has no floor, it just sits on the ground. I put a thick layer of barley straw over the ground, and change it when it gets too dirty - the whole lot goes in the compost bin. I have episodes of picking up the poo that accumulates under the perch every morning, which also goes into the compost. Then I get lazy and ignore it for a while.

Door
The chickens have their own little door to go in and out of. I used to shut it every night for fear of predators, but I haven't done that for years. We do have rats around at times, for which we lay poison bait, but I've never seen evidence of them in the coop. Our feeder is a rodent-proof hopper that only opens when the chickens stand on a platform. The local cats have long since been put in their place by the hens, so they're not a problem. If I had immature chickens I'd shut them in at night, however, because they are a bit more vulnerable.

That concludes our tour. Please ask questions if you have any, or maybe even leave a link to a tour of your own coop so newbies can get some ideas.

Posted by Keeping Chickens NZ - Andrea Graves at 11:44 am